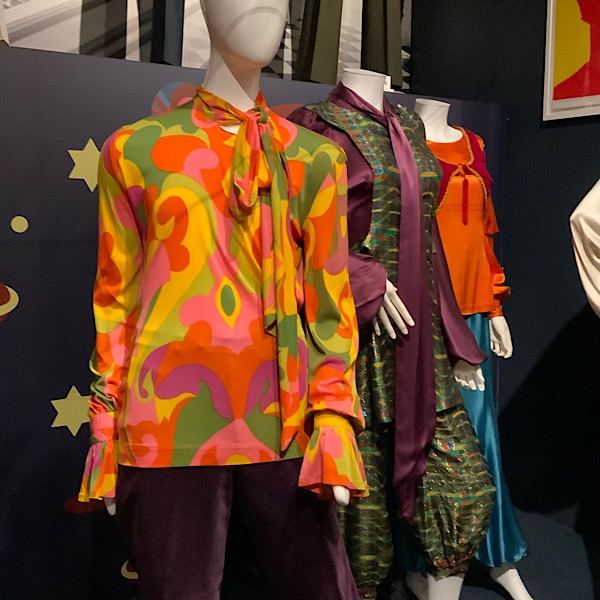 While Swinging London promoted consumerism and futurism, a very different ideology was developing in parallel. The Underground were ‘arty’ and intellectual. They rejected materialism, seeking instead spiritual and psychedelic enlightenment. On 11 June 1965 this alternative community congregated at London’s Royal Albert Hall for the International Poetry Incarnation, energised by the arrival of American poet Allen Ginsberg. The Counterculture had arrived.

My preconceptions of the hippy flower power movement of the movement of the late 1960s led me to think the clothes on display would be whimsical. The dressmakers creation of fantasy, floaty clothes in bright colours and prints. The above quote also conjures up this image. Entering the exhibition I did not expect to see elegant wearable garments and beautifully structured tailoring, this is what struck me most about the exhibition. Classic styles in bold bright prints that would look current on today’s high street.

The exhibition is categorised by the boutiques that made the era famous. Think Kensington High Street and Chelsea’s Kings Road rather than swinging Carnaby Street. Biba, Apple Boutique, Granny Takes a Trip and Quorum amongst many others.

Long trousers that softly flare from the hip, wrist length pussy bloused shirts. Long maxi dresses alongside mini skirts that didn’t show your underwear. Pointed collars on shirts and tailored jackets. ‘The Children of the Revolution’ raided their grandparent’s wardrobes and attics to create their own style. This resulted in a breakaway fashion, inspired by Art Nouveaux and Art Deco. The prints and colours were clearly taken by these two key design periods. Large swirls of colour contrast with smaller graphic, angular prints.

In the eyes of the anti-capitalist hippies, the fashion system restricted personal freedoms and encouraged consumerism. Instead, they sought inspiration in the clothing of long ago and far away, accessories with ethnic jewellery, peace symptoms and protest badges. Where as early 1960s fashion featured flat Pop Art-style geometric flowers, the hippie favoured floral motifs they themself had embroidered on their jeans. Authenticity was key. And nothing appeared more natural and honest than a partial state of undress, or a naked body daubed with paint – clothes were merely an obstacle to the freedom of the body and mind.

Upstairs in the exhibition, the garments take a different turn. Heading towards the seventies, the long sweeping hemlines, patchwork fabrics mixed with lace are what I recognise to be from the hippy period. In stark contrast, I was drawn to the cris-cross print on one dress (photo to the right) and then read it was from the 1930s, which made more sense.

Vintage fabrics and indigenous pieces reflecting the decade’s interest in ‘ethnic; cultures, provided elements that could be ‘patchworked’ together to create an individual style – Hung On You sold boots made from Kilim rugs, while Granny Takes A Trip sold unique dresses created from Indian bedspreads. By the early 1970s the culturally eclectic look had been adopted commercially and printed Indian cotton skirts were everywhere.

Leaving the dark corridors of the museum out into the bright afternoon, my eyes were drawn to sixties inspired prints in the clothes of the people along Bermondsey High Street. The decade has had a lasting effect on fashion, including the values of reusing and reinventing style. Fashions and textiles from the Sixties now find themselves sort after pieces for those who prefer to reuse textiles to create an individual look.

There is a week left to catch the exhibition if you can. It finishes on the 13th March.

Vintage Fabrics from and inspired by the 1960s 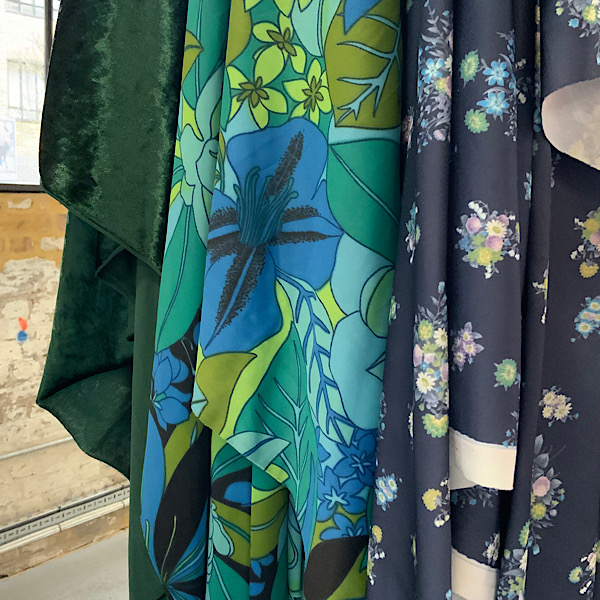 Inspired by the recent 1960s exhibition at London’s Fashion and Textile Museum. Beautiful People: The Boutique in 1960s couture culture. I’ve pulled together an edit of original vintage fabrics from the 1960s and some prints clearly inspired by the decade