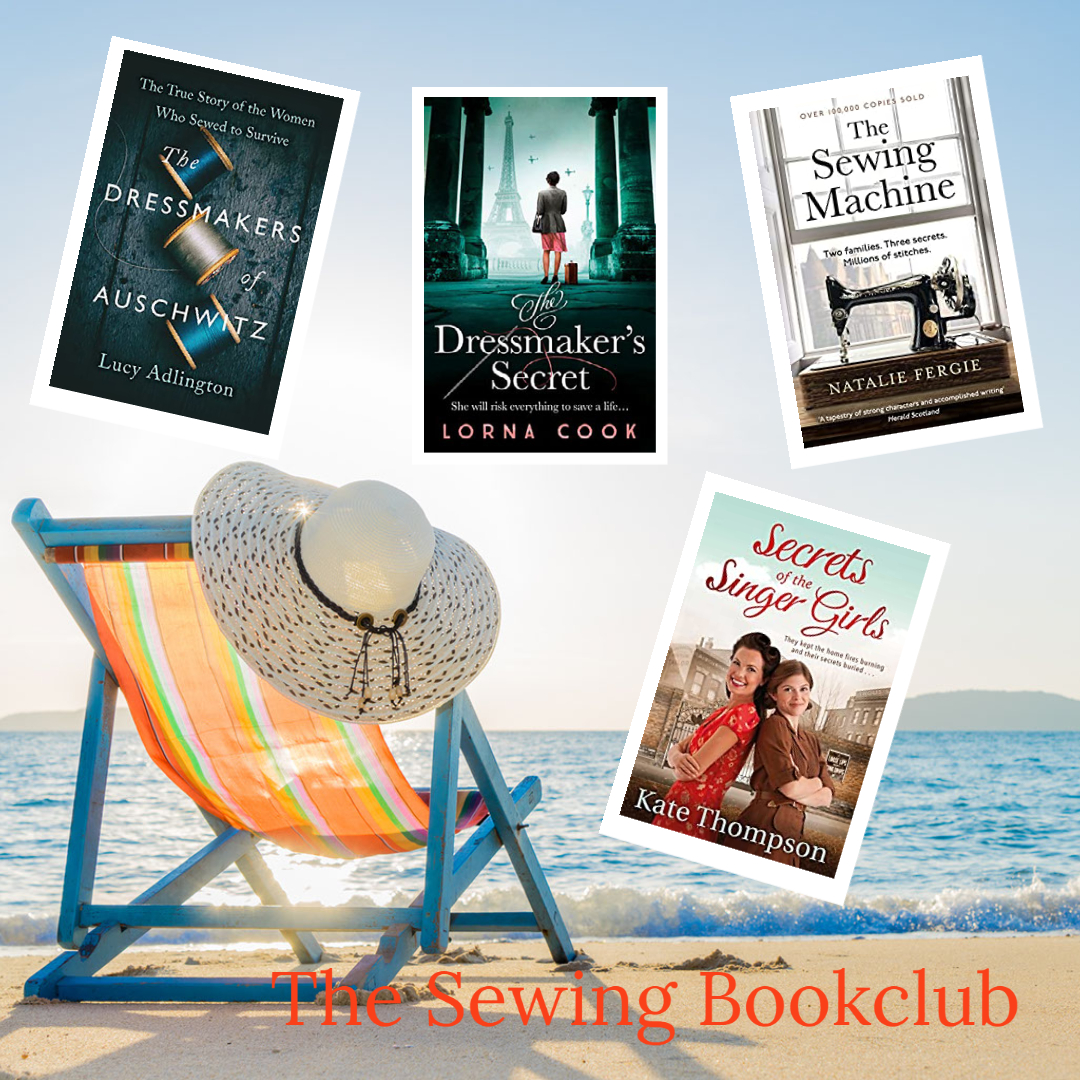 Six sewing themed summer Reads. If we can’t take our sewing machines with us on holiday, at least we can read about sewing

Holidays are the best time to catch up on reading. Perhaps fish and chips in South-end-on-sea or two week’s lying on a sandy beach. I’ve pulled together a collection of books that are sewing themed (plus one Library themed book because who doesn’t love a library!). I am completely won over by audio books even though everyone tells me a real book is best. I started a few years ago when I had a long commute to work, I would listen to a book whilst hand sewing on the tube. Thankfully I no longer have a long commute, instead I listen to books as I sew in my studio. On holiday, an audiobook means I can still multi-task, listening to a book with a hand sewing project on the go.

As I pulled this list together I realised the books are all set during war time, I wonder why that is? I have read most of them but not quite all, a couple are on my wish list. Please let me know if you have read these books and what you think, or if you have any of your own recommendations. If you are a writer, please write a novel about sewing, there are not enough sewing themed books out there!

The protagonist works for Coco Chanel, what is not to love? This novel is top of my wish list…

1941, Nazi-occupied Paris: In the glamorous Ritz hotel there is a woman with a dangerous secret…As Coco Chanel’s assistant, Adèle lives side by side with German officers in the splendour of The Ritz hotel. But Adèle has a secret. She is working for the resistance, right under the Germans’ noses. As occupied Paris becomes more and more dangerous, Adèle will have to decide if she can risk everything to save innocent lives and protect the man she loves… Present day: Chloé’s grandmother has never spoken about the war and avoids questions about the legendary designer she once worked for. Now Chloé has come to Paris, to uncover the truth about Adèle’s life. But is she prepared for what she will find? And for the power of her grandmother’s secrets to change her family forever…

Secrets of the Singer Girls by Kate Thompson

I discovered Kate’s book in my local library. Sewing and the East End of London, of course I was going to love it! A few weeks later Kate gave a talk at Whitechapel Library, bringing along Sally Flood. An amazing women in her eighties who had worked in the rag trade, and one of the women Kate had interviewed for her research. We all had a lovely chat over a cup of tea and I’m happy to say that I’ve been friends with Kate and Sally ever since.

Secrets of the Singer Girls is Kate Thompson’s heartwarming and moving novel about the brave, hardworking women who kept the homefires burning in the East End of London during World War Two. 1942. Sixteen-year-old Poppy Percival turns up at the gates of Trout’s clothing factory in Bethnal Green with no idea what her new life might have in store. There to start work as a seamstress and struggling to get to grips with the noise, dirt and devastation of East London, Poppy can’t help but miss the quiet countryside of home. But Poppy harbours a dark secret – one that wrenched her away from all she knew and from which she is still suffering . . .

Secrets of the Sewing Bee by Kate Thompson

A prequal to the Secrets of the Sewing Bee, lots of sewing and history to get you hooked! Orphan Flossy Brown arrives at Trout’s garment factory in Bethnal Green amidst the uncertainty of the Second World War. In 1940s London, each cobbled street is strewn with ghosts of soldiers past, all struggling to make ends meet. For the women of the East End, their battles are on the home front. Flossy is quickly embraced by the colourful mix of characters working at Trout’s, who have turned their sewing expertise to vital war work. They fast become the family that Flossy has always longed for.

The Sewing Machine by Natalie Fergie

Another book that is on my wish list! The Fold Line Facebook group recommended this book. It is 1911, and Jean is about to join the mass strike at the Singer factory. For her, nothing will be the same again. Decades later, in Edinburgh, Connie sews coded moments of her life into a notebook, as her mother did before her.

More than a hundred years after his grandmother’s sewing machine was made, Fred discovers a treasure trove of documents. His family history is laid out before him in a patchwork of unfamiliar handwriting and colourful seams. He starts to unpick the secrets of four generations, one stitch at a time.

The Dressmakers of Auschwitz

Equally fascinating and haunting, this book stayed with me for a long time after I read it. At the height of the Holocaust twenty-five young inmates of the infamous Auschwitz-Birkenau concentration camp – mainly Jewish women and girls – were selected to design, cut, and sew beautiful fashions for elite Nazi women in a dedicated salon. It was work that they hoped would spare them from the gas chambers.

This fashion workshop – called the Upper Tailoring Studio – was established by Hedwig Höss, the camp commandant’s wife, and patronized by the wives of SS guards and officers. Here, the dressmakers produced high-quality garments for SS social functions in Auschwitz, and for ladies from Nazi Berlin’s upper crust.

I haven’t read Natalie’s book yet but it is on my wish list as soon as I have another credit. Let me know what you think if you have read it already. Plucky English girl Cora Mason has reinvented herself as Coralie de Lirac– confident French beauty with aristocratic connections. Catapulted into the sensuous world of Parisian society, Cora becomes a lady’s hat maker, but living beyond one’s means isn’t easy. When Paris is threatened, the influence of a high-ranking lover protects her secret past . . . but the cruel demands of war – and of love – cannot be kept at bay forever. Soon Coralie must find the courage to do what’s necessary to protect her friends, her freedom and everything she believes in.

I know this is the third book by Kate in this list and it isn’t even about sewing, but Kate is my friend and I wanted to tell you about her new novel The Little Wartime Library. The novel is based on an amazing real life library in the depths of Bethnal Green Tube station during World War Two. I read it earlier this year and couldn’t put it down. It is already available in hardback, audio and eBook. The paperback comes out on the 1st September.

London, 1944. Clara Button is no ordinary librarian. While the world remains at war, in East London Clara has created the country’s only underground library, built over the tracks in the disused Bethnal Green tube station. Down here a secret community thrives: with thousands of bunk beds, a nursery, a café and a theatre offering shelter, solace and escape from the bombs that fall above.

Remember to support your local library, with so many closing this past decade we need to use them or lose them. If they don’t have any of these books on their shelves the library can order them for you. Ask them about their digital scheme too as your library card gives you access to audio and eBooks. You check them out like you would a regular book.

Sewing also makes it into the movies, find my top six featuring sewing machines on my blog.