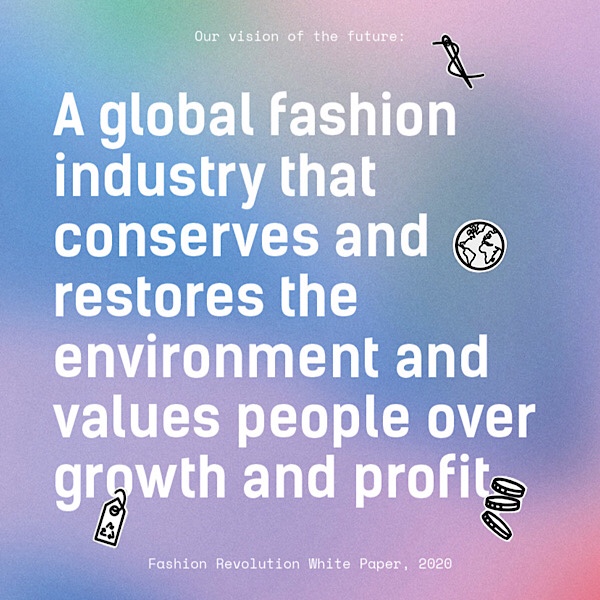 During COP26 there have been plenty of stats on the negative effect of fast fashion on the environment. As a sustainable business it is something I have campaigned about for years and I’m glad to see the awareness growing. But do you ever wonder how we got into this situation. I worked as a fashion retail buyer in the 1990s and selling high quantities of clothes at a cheap price was our focus, long before the influence of social media. So if buying lots of cheap disposable fashion isn’t influenced by social media, when did it begin?

Two exhibitions I’ve visited in the past have helped me understand consumer behaviour and the popularity of fast fashion. In 2017 I visited ‘Fashion on a Ration’ at the Imperial War Museum in Manchester. I enjoyed learning about how people coped with the rationing of clothes during the 1940’s and early 1950’s. But what was surprising to me was the short film at the end of the exhibition.

Fashion industry leaders discussed the influence WWII had on today’s current fashion industry. I was particularly interested in the comment about how high street fashion today is made to be thrown away after a few wears and we are encouraged to buy new rather than make do and mend. The developments in manufacturing during the 1940’s was the forerunner of mass production of clothing that we know today, making clothes more affordable and widely available. I can’t deny that I enjoy being able to buy ready available clothes at affordable prices but the negative effect it has had on our environment over the decades has had a devastating impact on the environment.

A year later I visited ‘Fashioned from Nature’ at the Victoria & Albert Museum. Curator Edwina Ehrman made it clear that Popular luxury styles were already having an impact on nature as early as the 17th century. ‘The fashion for beavers fur hat was so great even by early 1600 European beavers were so depleted the French and British were driven to compete with each other find new supplies in what we now know as Canada.’ Edwina selected a modern day photo of a beavers in the wild so viewers could link the hat with it’s source. She wanted to show that ‘our ancestors were not complacent and many were just as concerned as we are today’ on the impact fashion was having on the environment. ‘We found very interesting early letters from 1760’s onwards with pollution concerns about the rivers around Leeds from wool dying. Into the 19th century these things goes beyond letters and court cases to campaigns and visible presence on the street. Britain was the first to set up societies to protect animals and then birds.’

Thankfully many fashion companies now have sustainability on their agenda and as customers we have the power to choose with our purses. An easy way to be sustainable is to choose second hand. My focus at Olive Road London is re-using the resources we already have out there by selling fabric that has been bought new but never been used. Before you buy (even second hand) it is important to have a project in mind. Think about what you are going to create with the fabric. If the fabric isn’t right when it arrives, I accept returns. I’d prefer this than the fabric ending up in a fabric stash unused.