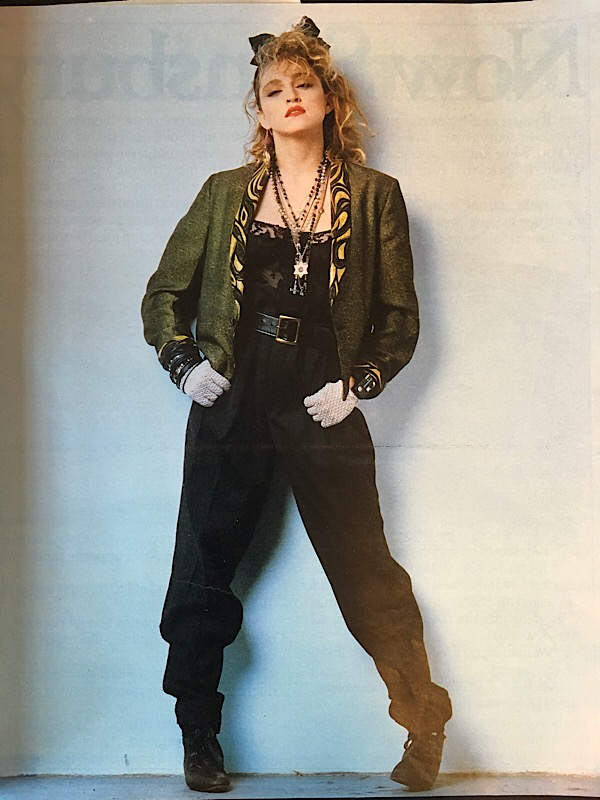 Known as the decade of power dressing, the 1980’s gave teenagers like me strong women role models to look up to. Madonna and Joan Collins rather than the Iron Lady who wore blue. A box of knitting patterns took me back to the eighties this week. They were gifted to me by the landlady of my local pub, Leslie and belonged to her mother, a huge knitting fan. A waft of vintage paper welcomed me as I dived into the box. A time capsule from the early eighties; I found newspaper magazine supplements, their glossy front covers perfectly intact with Madonna staring up at me. She was dressed from the era of Desperately Seeking Susan and wearing that ‘thrift store’ jacket. I delve deeper to find an issue of the express from the wedding of Lady Diana and Prince Charles. These were both tucked into cheesy shots of couples modelling chunky cable knit jumpers.

When I wasn’t putting lace in my hair dancing in my bedroom to Madonna on loop I was watching Dynasty. The complicated plots with outrageous outfits to match had me mesmerism. Joan Collins as Alexis blew everyone else out of the water, especially Crystal after that pond fight! A favourite moment from the whole series was when Alexis commandeered the Carrington house. She rubbed Blake’s nose in it by hosting an enormous party and demanded the guests wear black. Joan makes her entrance at the top of the grand stairs in the most enormous red ball gown everyone staring up at her. As a person who shies from being centre of attention, I loved her audacity. Since then, if I need some encouragement to speak up or have more confidence, I think ‘what would Joan do?’. She will always be Alexis to me.

I wanted to hate the new Netflix remake but one episode of over dressing, impossible to follow story lines and sultry looks, I was hooked. Modern twists for the Kardashian-reality-TV-age it feels current despite it’s 1980’s origins. Let’s face it, the actress who now plays Alexis was never going to match Joan Collins and to be fair she doesn’t even try to. For me Fallon has taken over Joan’s baton, even emulating the red dress scene in one of the first episodes. Played by Elizabeth Gillies she has all the wickedness and drama of Alexis and yet you know she has a kind heart somewhere under her Gucci dress. Her wardrobe outrageously matches the storylines! Here she is at the Great Gatsby party to kick off season two.

This festive season, why not head back to the eighties for your partywear makes? A nod to Madonna and Joan or Dynasty 2.0 and channel Fallon’s style. A trim of black lace under a sparkly jacket, soft velvet kimono in black or dusky pink, or combine lace and velvet for a gorgeous luxe outfit. These party dress fabrics now listed on my online shop are a small pieces but enough to create a festive outfit truly worthy of the power dressing eighties. Be quick! at Olive Road all the fabrics are vintage and pre-loved and often one off, unique pieces.