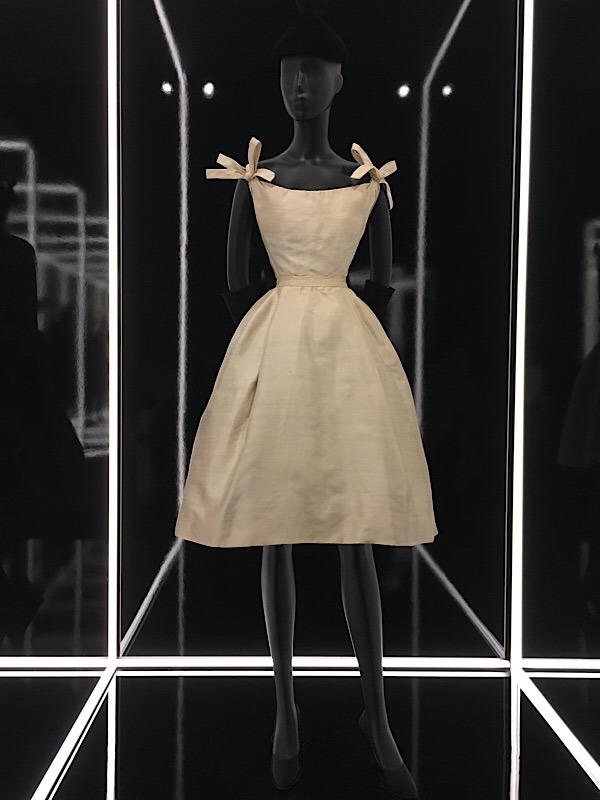 Christian Dior: Designer of Dreams opens this weekend at the V&A in London. A continuation of the exhibition at the Musée des Arts Décoratifs in Paris, the London edition displays 500 Dior Haute Couture pieces, each one of them hand made with 60 percent new content from the Paris show. As a member of the V&A, I was lucky enough to attend a preview of the exhibition along with a lecture by the V&A Curator of Fashion and Textiles, Oriole Cullen. As I walked around in a dream like state absorbing the beauty, time and skill invested in these wonderful pieces, it became clear why the exhibition is called ‘Designer of Dreams’. Oriole Cullen reveals the stories behind key items in the exhibition. 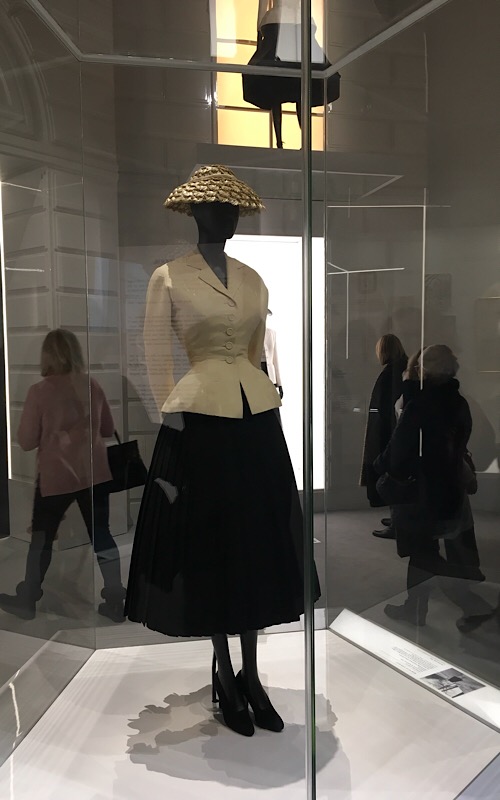 “It’s quite a revolution, dear Christian. Your dresses have such a new look!”

Carmel Snow, Editor-in-Chief of Harper’s Bazaar famously describes Dior’s first haute couture collection in 1947. The phrase stuck and it is the silhouette the designer is best known for. A revelation of longer hemline skirt with a nipped in waste and wide hipped jacket. The look was controversial after the austerity of World War II, fabric was in short supply and the UK was still experiencing rationing. Protesters in America held placards with the slogan ‘Monsieur Dior we abore your dresses to the floor’. The British Head of the Board of Trade was outraged and forbid fashion journalists to report favourably on Dior’s New Look. After years of make do and mend people wanted to wear the ‘New Look’. The Head of Fashion at the Royal College of Art used ‘black out’ fabric, that was readily available, to re-create the skirt. ‘The New Look’ describes the siloutte of the collections, the most famous outfit being the Bar suit. Ten years after Dior’s first Haute Couture show the V&A created a permanent space in their South Kensington home for a permanent fashion collection. The Octagonal Court, which still houses the permanent fashion collections today. The curators identified the Bar suit as a piece that represented mid-20th Century fashion. With the help of Cecil Beaton, the museum contacted the House of Dior to request a suit. The House of Dior replied and offered to make something new as the original suits were looking tired. The Curators were adamant that they wanted an original piece. The House of Dior donated the Bar suit and fittingly, the first mannequin to welcome us into the exhibition wears the very suit owned by the V&A. It stands proudly outside a recreation of the Townhouse façade of Dior’s 30 Avenue Montaigne Atelier. 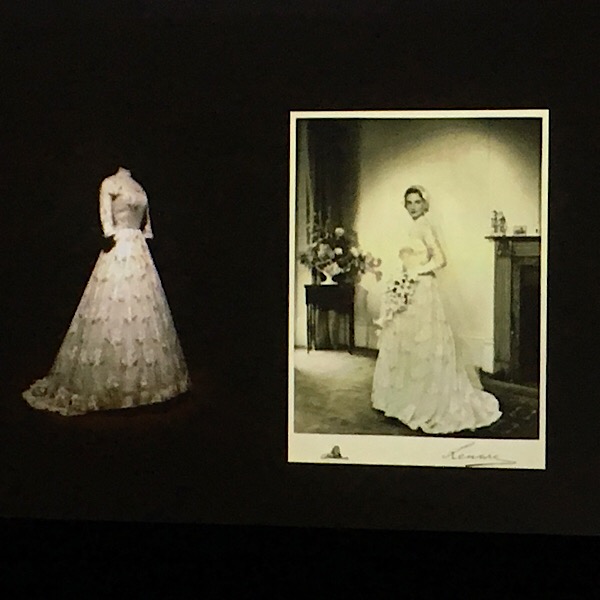 “I have a Dior wedding dress”

‘We received a note during the summer from a lady who saw were having a Dior exhibition. She said “I have a Dior wedding dress”. We went to visit her and she took this dress out, it was just beautiful, so immaculate. She had this wonderful portrait of her from 1953 age 19, at home in Regent’s park, where she was photographed in her Dior wedding dress. It was fantastic to have these two things together. It is also really nice to put a wedding dress in the show as it is something people are always keen to see.  You will notice in the Dior in Britain section, there is a magazine that Dior wrote an advice column for. He wrote for two magazines, Modern Women and Women’s Illustrated. We have one of those open on the page where he is advising on wedding gowns. Dior talks about young brides and says they shouldn’t have trains and they shouldn’t have lavish materials. They should be beautiful dresses. This dress fits that bill exactly. It is made from a very fine muslin, with a beautiful floral embroidery and metallic gold leaves on it. We were delighted to include it in the show’ – Oriole Cullen. Unfortunately I didn’t get a clear photo of the dress in the exhibition. You can see a glimpse of it at the end of this video. 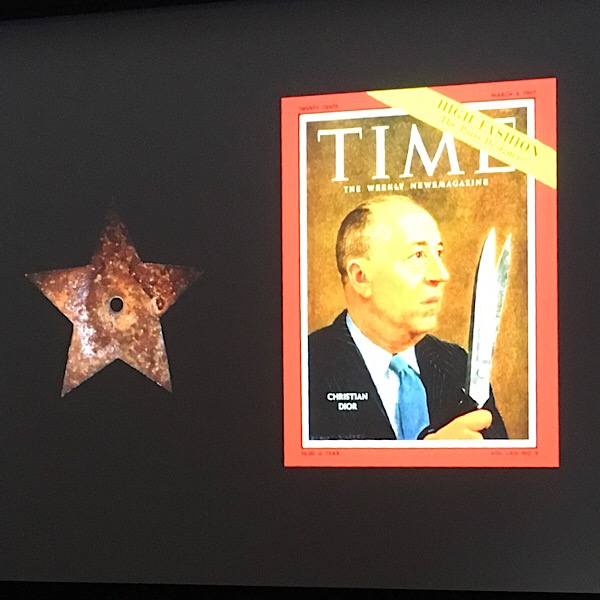 It is surprising to find a tarnished metal star sat alongside such opulent handmade dresses in the exhibition. ‘This relic of Dior hung in the Atelier throughout the Designer’s life.’ Cullen explains that Christian Dior was immensely superstitious, often consulting a clairvoyant and ‘carried around a pocket full of lucky charms’. In 1946 Dior is approached by wealthy textile merchant, Marcel Boussac, who wants to invest in a couture house, Philippe et Gaston, with Dior as the head designer. A year later Dior wants to leave and Boussac has agreed to invest in a couture house bearing the Dior name. Pondering on the deal and unsure whether to go ahead, Dior trips over this rusty star that has fallen off a car wheel. ‘He sees this as a sign. The star is telling him he should go ahead’ Cullen continues that the designer had copies made in gold for loyal members of his staff, to say thanks for their commitment to the company. ‘It was a very important emblem for Dior himself and a lot of the designers since have reinterpreted it as a motif of the house. So we are really happy to have that on display in the case’ Cullen reveals. 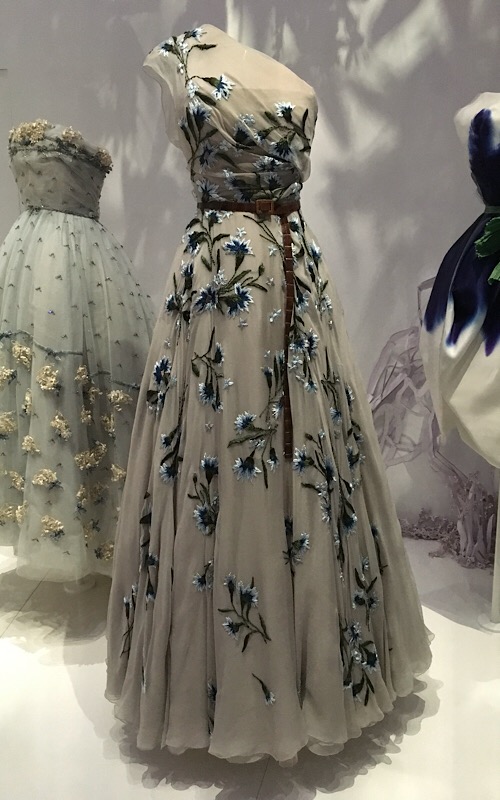 “After women, flowers are the most divine of creations”

Dior was born within a wealthy family in Normandy and one of five children. Growing up close to the Normandy cost, he would look out over Le Channel at England and confessed he was an Anglophile. On his first visit to Britain he described feeling truly free. His mother, Madeline, was a keen gardener, creating English style gardens for their coastal villa. Through her love of gardens, a young Christian connected with his mother and designed a pergola for her to shelter from the sea breeze. The garden theme runs strongly throughout the exhibition. In the artefact’s from Dior’s life at the beginning of the show I notice a beautifully illustrated seed catalogue. Dior created key silhouettes for each collection. His first collection in 1947 he named one of the two sillouttes ‘La Ligne Corolle’ or Corella in English; the collective name for the petals of a flower. We know the famous silhouette as ‘The New Look’ but it was inspired by an upside down flower. Many of Dior’s creations are adorned with individually hand embroidered flowers and his perfumes have floral accents. Half way through the show is the Garden Room. A dream like space with thousands of Lilac Wisteria, Roses, Clematis and Lilly of the Valley petals fashioned from paper. Click here for a slowmo video showing how the beautiful art installation was created. Each dress inspired by Dior’s love of gardens, a theme that current designer Maria Grazia Chiuri has embraced. (above photo is of a dress named ‘Nuit Australe Dress’ by Maria Grazia Chiuri for Christian Dior. Haute couture from Autumn/Winter 2017). Click here to see a short video of the dress in the photo. 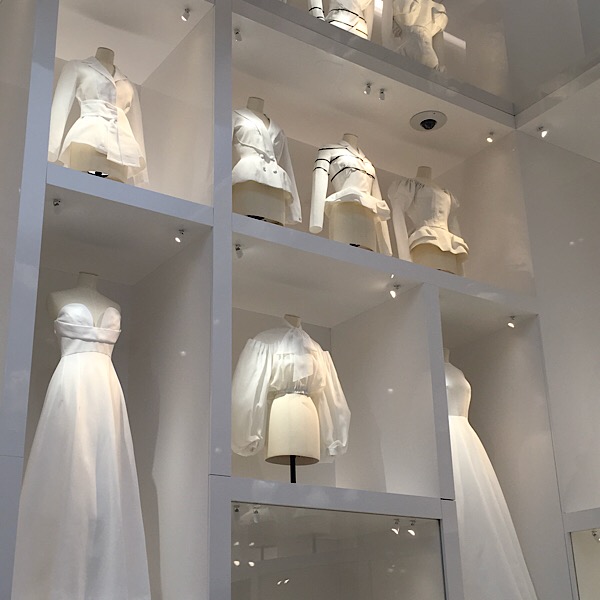 In contrast to the rich colours and embellished designs of the previous rooms, the Atelier room is stark white. Clinical in design, it perfectly represents the white cotton toiles that are created by the geniuses of garment construction. Peering through the glass, it is possible to see up close the lines, pins and notes marking up these prototypes. Cullen explains ‘it speaks of the relationship between the Ateliers and the designers. Where the designers make a sketch, they will come up with the idea. The Ateliers have to realise that and turn it in to a 3D garment. They bring these toiles to the designers who say change this, change that. Dior himself had a special cane stick to point at the areas but today there is much more contact.’ 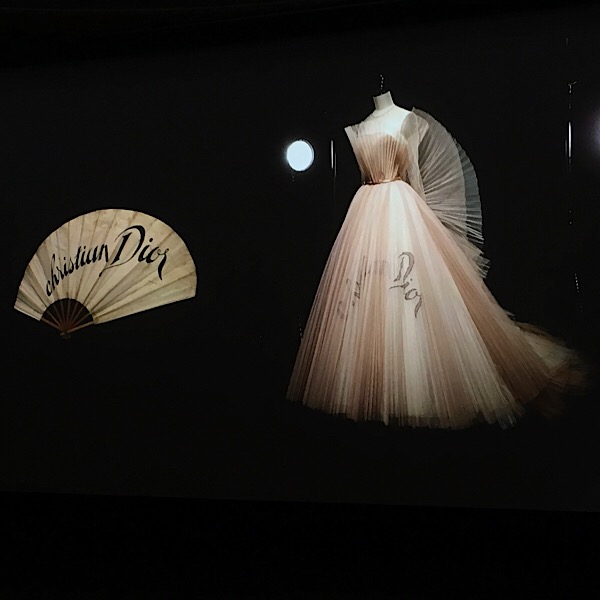 This epic fashion exhibition concludes with an exquisite nude coloured dress in a glass case set against a dramatic black back drop. Sitting next to the dress is a classic wooden fan made from cream fabric or paper and adorned with the black ink signature of Christian Dior. Designed by Maria Grazia, the dress emulates the fan with tiny pleats in the delicate fabric reaching out to the floor reminiscent of the Dior’s first collection silhouette from 1947. The famous Couturiers’ signature hand inked onto the dress in the same arc design as the fan. Dior illustrator Francis Marshall donated his archive to the V&A and it included this fan. The fashion shows at 30 Avenue Montaigne were very crowded, people crammed in on the staircase. Fans were often handed out to people help ease the hot atmosphere. ‘On Sunday night, Maria Grazia came to the show for the first time. It was the first time she had seen the actual fan and she was very excited’ Cullen finishes telling us at the end of the lecture. I’ll be returning to the show many more times to find these small details that can often be missed on the first viewing. I recommend buying a ticket for the show if you haven’t already.

Please get in touch if you would like me to send you a full transcription of Oriole Cullen’s lecture. Christian Dior: Designer of Dreams opens at the V&A in London on 2nd February until 14 July 2019. Click here for tickets.