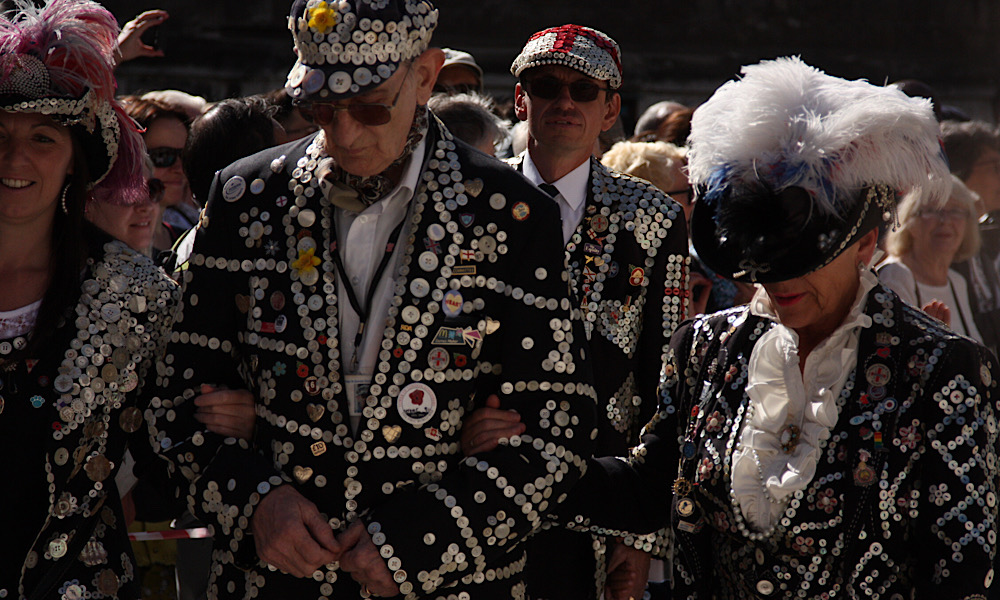 A collaboration between Olive Road London and The Button Queen: a collection of vintage fabric covered buttons. I look into the history of the infamous London shop and one of their famous customers…

‘I’ll be in buttons‘ Doreen tells the woman on the other end of the phone. The caller is from the BBC and has asked the Pearly Queen of Bow Bells and Old Kent Road to be part of a music programme with Paloma Faith. ‘Buttons’ is how Doreen describes her ornate traditional outfit, a uniform for all the charity work that she and her fellow Pearly Kings and Queens do.

Doreen Golding’s first queenship was ‘Old Kent Road’ along with her King Larry after helping the Pearly Queen of Redbridge, Peggy Oliver. She asked Doreen and Larry to be part of her pride. I asked Doreen how she became a Pearly Queen, ‘I slept with a Pearly King’ she jokes, then adds ‘You work for your title. Make yourself an outfit, then wait for worst day of the year with a collecting pot and come back eight hours later. You have to be as smiley at the end of the day as you were when you started.

‘How did I become a pearly queen? I slept with a pearly king’

‘The over riding principal is you must be someone who raises money for charity. Do things for others, it is about giving back.’ Doreen exclaims as she sits on her Union Jack sofa surrounded by photos of her with the famous, royalty and most importantly her family.

I couldn’t resist asking Doreen about her impressive and heavy jacket. ‘I start with the sleeves, do a pair of cuffs and work upwards.’ Each white pearlised button is individually stitched into a symbolised pattern. ‘Zig zags are the ups and downs of life, flowers are friendship. Hearts, clubs, diamonds, spades, horse shoes, donkeys and carts, they are all good luck charms’

The buttons were donated by the infamous shop, The Button Queen. I often walked into the old Marylebone shop when I was a fashion student in awe at the rows of boxes on display as if they were priceless jewels. The business is now based in Wales and run by Kat, the Granddaughter of the shops founder Toni Frith. Kat sells her buttons online and at craft and sewing shows.

Toni Frith started her business with an antique stall on Portobello Road Market. She quickly realised that American visitors collected buttons and The Button Queen was born. Her first shop was in Marlborough Court until the 1960’s when the business then moved to Marylebone, which is where Doreen would pick up the buttons to adorn her first Pearly Queen outfit. I met Kat at The Handmade Fair when she suggested we work on a collaboration. I gave her small, scrap pieces of vintage fabric that would have otherwise gone to waste. Kat created them into striking covered buttons to brighten up any outfit giving it a vintage style.

Toni and her son Martyn were invited to the Pearlies’ Harvest Festival, which still takes place each year at St-Mary-Le-Bow Church in the City of London. The church is home to the Bow Bells, you can only be called a cockney if you were born within sound of those famous bells when they chime. ‘I’m only the queen who has been crowned in the church.’ Doreen gleams with pride. A Freeman of the city of London, the Pearly king of Bow Bells asked Doreen to be his queen. Doreen kept ‘Old Kent Road’ on her jacket as a sign of respect to her late husband Larry.

“‘Being a pearly queen it gives me an aim in life to go out. To work alongside the pearlies is wonderful. All likeminded people give back something to the community. Once you have made that commitment you don’t want to let people down.”

I had the pleasure of meeting Doreen when I was helping author Kate Thompson research her book The Stepney Doorstep Society. I don’t have the privilege of being born within the sound of Bow Bells but having lived in Bow more than half my life I consider myself a Londoner. Kate invited the Pearlies to the launch of her book. Singing ‘maybe it is because I’m a London’ in a room packed full of Cockneys and Pearlies was my ceremony to become a true Londoner.